The History of The Cannon Theatre 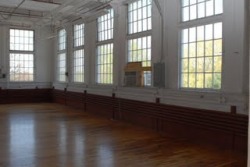 The Cannon Theatre was founded by Shawn Cannon and Bret Bahe, who shared a dream of creating a community theater – a place for learning, and great plays, a place where people could enjoy the company of others, laugh, and just lose themselves in the joy of artistic expression. This intimate performance space was conceived of, designed, and built from scratch after they discovered and saw the great potential of a unique open space in the old mill building in Littleton. Over the years, the theater incorporated, and then became a non-profit organization, managed so that every precious cent made from each production is carefully fed right back into the creation of the next.

During the Pandemic of 2020, the theater was forced to close, as their overhead was too high,   They began searching for a new space during 2021, and found it in the late summer of 2021.  They are planning on opening the end of March 2022, with a new black box theater experience.

The Cannon Theatre board, which still includes the theater’s very active and passionate founders, invites you to join us and experience this welcoming community, whether as an audience member, an actor, backstage crew, or even director. We guarantee you will leave feeling satisfied!

Shawn Cannon has been acting and singing since having the role of Cinderella in fourth grade!   She studied in Texas, Colorado, and Utah, majoring in drama, vocal performance, and TV/Film acting.  She modeled for 20 years and has also performed in theatre, musicals, bands, cabaret, and TV & Film. The areas she has worked in are Houston, Denver, Chicago, LA, and Boston.  She has also been directing for over 25 years, does choreography, musical directing and writes original musicals.  Some of her favorite plays she has directed are:  "Bye, Bye Birdie", "Moon Over Buffalo", "Steel Magnolias", "Jane Eyre", "Lucky Stiff", "Popeye, The Musical", "By Jeeves", "Dirty Rotten Scoundrels", " A Funny Thing Happened on the Way to The Forum", "Peter and the Starcatcher", " How To Succeed In Business",  "Annie Get Your Gun" and "Matilda".

She has taught voice and acting for over 25 years, teaching for JF Talent in Denver, Colo.,  John Robert Powers in Los Angeles, CA, the Acting Loft in Manchester, NH, for Acton-Boxboro Community Education in Acton, MA, and for  Littleton Community Ed.  She is currently singing in a Rod Stewart tribute band, with the “Blondes Have More Fun” band.   She also enjoys doing solo gigs----singing at weddings, private and corporate parties whenever she gets a booking---traveling all over the country as well as overseas!

She has tried to create a black box theatre with quality, family friendly shows that are enjoyed by all ages.   She also is intent on teaching kids and teens how to experience and learn what good theater is all about----from the blocking, characterizations, and acting techniques, to the costuming and hair and makeup.   She wants to create a whole new generation of kids with theatre knowledge!

Bret spent 10 years in Hollywood building sets, working as a professional propmaker.   He met Shawn there, and since she needed someone to run her sound at her cabaret shows, he quickly took on that challenge also.    He loves doing photography, and after spending another 10 years doing that in LA, he has started taking pictures again....    He is a HUGE part of The Cannon Theatre, and has worked right alongside Shawn----whom he eventually married----building this theatre and making their dream come true.

Originally from the UK, Jerry began performing in local theater in 2018, when his wife Jen dared him to audition for a stage adaptation of the BBC comedy Blackadder (a childhood favorite) here at the Cannon Theatre. He then appeared with his son Jude in Cheaper by the Dozen, also at the Cannon, followed by Neil Simon’s California Suite at Theater III in Acton and Mr. Wormwood in last season’s production of Matilda, again at the Cannon. Professionally, Jerry has had a 25 year career in financial forecasting and inventory management with international sports brands, such as Puma, Nike and Foot Locker. He is currently the Director of Business Process and Development at a major US retailer and lives in Littleton with his wife and three children.